Tigershark is an above-average shooter that is better known on the Playstation console. Developed by n-Space and published by GT Interactive, the game is set in the near future, pitting you against the entire Russian army who is intent on conquering Japan, which has been severely flooded thanks massive earthquakes as a result of geothermal test gone awry. Your job is to pilot a futuristic plane/submarine hybrid craft and fight the Russians above and below the charred remains of Japan, in well-designed but pixellated 3D worlds.

Each of the 10 levels (including one training mission) gives you multiple ground targets that range from huge military installations to radars. Along the way, you must destroy Russia's submarines, battle cruisers, and other ships. Most of your targets are underwater, but you will need to surface to fight opponents who have the uncanny ability of being able to shoot at you from the surface.

Despite pixellated graphics and strange-looking white fogs on the ground-level landscapes, Tigershark is quite fun. There are multiple views you can toggle, lots of weapons, and hundreds of enemies. The combination of underwater and surface gives the game a nice change of pace from the usual space-only or underwater-only titles, and zipping around above and below the waves is quite exciting. The game places too much emphasis on completing objectives, but there is still plenty of frenzied, nonstop combat. All in all, a solid shooter that is not quite a top game, but is definitely worth a look. 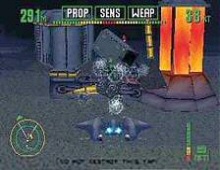