PC conversion of Taito's 1990 arcade game Super Space Invaders '91. As you would expect, it's the classic shoot'em up you all know, updated with lots of different extra weapons, various background graphics, a co-operative two-player mode and a fun bonus level called "Cattle Mutilation". It's decent, although as usual the great music of the arcade original is absent, considerably lowering the atmosphere factor. Fans of original Space Invaders will have a lot of fun, though, although it gets repetitive quite quickly with mundane enemy ships and level backgrounds that aren't up to par with Silpheed. 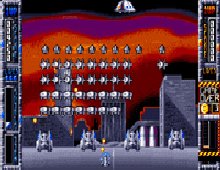 People who downloaded this game have also downloaded:
Galaxian, PacManWorlds