Galaxian is another near-flawless conversion of coin-op classic for Atari. This time the target is Namco's revolutionary vertical shooter, commonly regarded as the first truly multi-color video game ever made.

The gameplay is straightforward: anyone who has played Space Invaders will know what to expect. At regular intervals, which get shorter as you progress, the alien ships will swoop down in an attempt to zap you with their laser pellets or kamikaze attack. Killing charging aliens score more points than the ones flying in overhead formation. Flagships also score more points when they have red travel companions, depending on whether you shoot the companions first, and if you get all of them.

This PC conversion captures almost perfectly the feel of the arcade hit, minus the range of colors. As Trixter points out in his review at MobyGames, "...most of the Atarisoft conversions of then-classic arcade games were flawless, and Galaxian is no exception. The lazy arc of the enemies as they dive to fire at you is identical to the arcade. Like Galaxian? Got an old PC? You know what to do." A must-have. 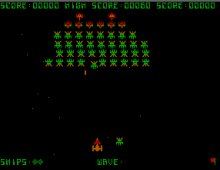