Final Impact is a fun and highly underrated parallax-scrolling vertical shooter in the same style as Raptor and Tyrian. Although it is not a "classic" like those two games, Final Impact deserves a lot more attention for its smooth gameplay, intuitive controls, and frantic action. Too bad the game was released only in a few European countries.

Similar to SWIV for the Amiga, Final Impact allows you to fire in eight directions as long as you pick up the right power-up that has turret mode. There are over 30 different weapons you can use, including smart missile and paveway bomb (my favorite). The game also has a two-player simultaneous mode which is more difficult than a single player game.

One of the best features of Final Impact is the mission briefings, which explains weapons enemy ships will be carrying in the current mission, and offer gameplay hints. You can also choose from three different ships, each with its own characteristics (as usual, one can carry a large payload, one is more nimble, etc.). You must also carry some mission-specific equipment in some missions which mark a good change of pace from the usual shooting spree. Last but not least, you can "store" weapons in this game, meaning you can switch back and forth between with ease.

When all is said and done, Final Impact certainly is not a watershed in the genre, but it is still a more than competent shooter that will keep you entertained to the end - even if the enemy ships could be more varied and the levels more interesting. Recommended. 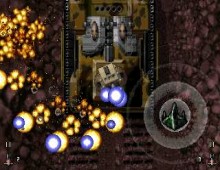