Incoming is an excellent 3D shooter from Rage Software. True to Rage's reputation as a leading action game developer, Incoming does not disappoint. Beautiful graphics, intense action, and a wide variety of locales, player-controlled vehicles, and enemies make Incoming one of the best shooters ever made.

The plot is the same-old "defend the Earth from invading aliens" premise we have seen too often already, so I have nothing else to add. Your goal is to kill alien invaders by manning turret, tank, helicopter, harrier jet, and even captured alien fighter. Battle will take you to various continents, culminating in your leading a massive counterattack on the moon. You can play the game in 3 different modes: arcade, action, or action-tactics. The "arcade" mode is a straightforward shooter, where you only need to worry about shooting everything in sight. The "action" mode is slightly more realistic and more challenging, and the "action-tactics" mode gives you limited control over other friendly units.

Incoming is mission-based, each introduced with a briefing that sets out your objectives, as well as provides plot development (hackneyed though it may be). The best thing about the game is the wide range of units you will control. Some missions have you manning an immobile turret, while others let you drive a ground hovertank, pilot a helicopter or a Harrier jumpjet, and even fly a captured alien fighter. This diversity and nonstop action keeps Incoming from being repetitive, and excellent 3D graphics (especially if you have a 3Dfx-compliant video card) will entice you to relive the experience from time to time. The game also has excellent multiplayer support: split-screen, and up to 8 players via LAN or modem.

Overall, Incoming lives up to Rage Software's pedigree, and will captivate you from the beginning to end. Yes, it's mindless. Yes, it's simple. But one could also say the same about Missile Command, Battlezone, and numerous other simple-yet-addictive classics. It's just a tad too short for an action game. Highly recommended. 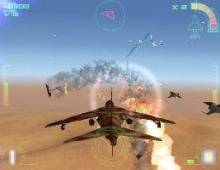 People who downloaded this game have also downloaded:
House of the Dead 2, The, Metal Gear Solid, Freespace 2, Blood 2: The Chosen, System Shock 2