Front Mission - Gun Hazard is a fun side-scrolling "mech" arcade/RPG platformer for the SNES console, set in Squaresoft's Front Mission universe. Although the game is not a turn-based tactical strategy game like others in the series, it retains a lot of highlights to set it apart from standard platformers. For example, the plot is interesting and evolves as you play - many levels begin with a lengthy cut-scene, and many fights (especially with "boss" characters) begin with a dialogue between mech pilots. Released only in Japanese, the game has been fully translated by AGTP, a fan translation group. Their impression of the game says it well:

"I thought I'd provide a review for those (much like myself) who finished Front Mission 3 and decided to look into the series more. Front Mission Gun Hazard is a great game. It's fun to play, and challenging too. It sports nearly a full hundred battle maps, ally units to take into battle, RPG-style experience and levels, and lots of equipment with which to customize your wanzer, although not nearly so much as in a mainstream Front Mission. This, in my view, is a plus -- the ridiculous customizability of your wanzers in the normal FM series has you constantly going back to stores to see if anything new pops up, and when it does, you spend half an hour outfitting your machines with the stuff. It often seemed that you spent more time in intermissions than you did actually playing the game, and Gun Hazard solves that problem nicely."

As AGTP says, Gun Hazard plays faster than the usual FM game, but is no less fun. I also like the fact that every enemy mech in the game displays an HP count on screen, so you always know how much damage you are dealing. The wide range of customization options mean you can replay the game multiple times (although if you manage to max out all the stats, your incentive may be minimal ;)). It is also quite challenging as a platform game, especially in the second half of the game when you have to deal with dozens of enemies at once. Highly recommended to action fans who want a bit more complexity than the usual sidescroller. 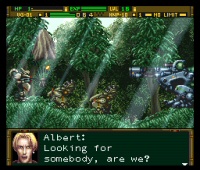 People who downloaded this game have also downloaded:
Freespace 2, House of the Dead 2, The, Final Impact, Star Fox 2, Fire Fight