One of the most underrated shareware releases from Epic Megagames, Fire Fight is an excellent, very addictive isometric shoot em-up from Polish developer Chaos Works. Although the game did well enough to warrant a later retail release by Electronic Arts, it unfortunately did not do well in the market and disappeared in the matter of months.

Fans of EA's own Desert Strike will be right at home with Fire Fight -- in fact, the designers aren't ashamed at admitting their influence: there is one mission in the game called "AKA Future Strike" to dispel any doubt. You play a futuristic skimmer pilot working for the autocratic "Phantom Council" which reminds me of the Empire for good reason ;) Your job, naturally, is to bring subversive planets back under the Council's control by flying strike missions against air and ground targets.

As Epic's own Zone 66 took the shooter genre to new heights with 360-degree freedom of movement, Fire Fight takes the innovation one step further by placing the 360-degree view within a smooth-scrolling isometric environment, brought to life by sharp SVGA graphics. The game also requires some tactical planning to succeed: in addition to shooting everything in sight, you need to collect weapons and equipment upgrades, beam up important items, drop off and pick up strike teams, and so on. Similar to Tie Fighter, you are given next objectives in the mission by radio as you complete each phase. Although bare, the HUD provides all important information, including an excellent situational radar that tells you where to go next (as well as warn you incoming air-to-air threats).

As usual, the missions (18 in total) get bigger and tougher as you progress, and there are secret bonuses for the perfectionists to find. Six dedicated multiplayer maps are available for fragfest fun, where as many as four ships can fight to the death under numerous customizable rules. Although the controls take some time to get used to, they are remarkably versatile once mastered, and allows for some impressive maneuvers. (the designers even make them similar to DOOM keys to help you along). There are tons of cool power-ups, including homing missiles, space mines, cloaking devices, grenades, and electric shockwaves. The single-player missions may not last that long, but with the replayability of the multi-player mode, Fire Fight is undoubtedly one of the best 2D shoot em-ups you will ever play, bar none. 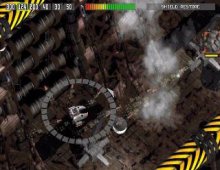