Frenetic Plus is a fun and addictive isometric shooter coded in Allegro. The official plot: "...Called upon to defend her nation in the midst of a civil war, [an android] Mercen 505 finds herself in deep space... alone, outnumbered, and lacking resources. Her three month trek will take her past numerous heavenly bodies, from planets to asteroids. Thrust into a perilous situation, she must utilize every resource at her disposal in order to reach Earth in time. The numerous detachments of the Exploratory Fleet are relentless in their pursuit, and the difference between success and destruction is but one mistake."

The game is a complete remake of Frenetic, an earlier shooter from the same designer. In contrast to most freeware shooters, Frenetic Plus is a long, commercial quality game that will take you more than a few hours to finish. The game offers attractive isometric (2D/3D) perspective, 33 missions set in various locations across the galaxy, plenty of monsters, and very cool special weapons. You can "...set enemy suits ablaze with missile packs, warp time-space with your special weapons, and unleash wanton destruction with seven suits and fifteen guns." One of the best features of the games is the ability to create your own weapons. This adds a lot of replayability and diversity to the game. Controls are easy to learn, and you will need to master them as quickly as possible because the game pulls no punches - the hordes of enemy ships and androids attack relentlessly from the very beginning. After each level, the game tells your your hit ratio, suit damage, and rank your performance in percentage terms. In contrast to most shooters, the backstory of the game is developed throughout: various news clips and e-mails you get during missions help you keep track of how the war is going.

As if 33 missions and dozens of weapons are not enough, you can unlock three different play modes including "time attack" and "random scenario creation" after you beat the game. Attractive graphics using a perspective not commonly seen in SHMUPs, nonstop action, genuine plot development, and very addictive gameplay combine to make Frenetic Plus one of the best and longest freeware shooters in recent memory. Highly recommended, especially to veteran gamers who are dismayed by the short length of most freeware shooters. 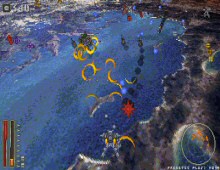