Dif-2 Mirage Thunder is a fun shooter from Taiwanese developer Softstar that will surprise veteran shooter fans with some novel twists to the shoot-everything-that-moves gameplay done to perfection in Silpheed and Raptor. The goal, as with a zillion other shooters, is to shoot the enemy ships and defeat each level's "boss" to progress to the next one. Apart from the usual plethora of power-ups such as duel fires, shields and the like, Dif-2 also introduces new ones such as power-ups that allow you to change your ship to a different one, and many types of homing missiles. Another novelty is that your ship has a "power bar" at the bottom of the screen that fills up when you're not shooting. The more the bar moves to the right, the more powerful your shots will be. This allows for some interesting strategy in the game, as you can wait for the most powerful shot to defeat that boss quickly. The downside, of course, is that you'll have to evade incoming fire while waiting for that bar. Some bosses are also more interesting than the norm, with retractable appendages, clones that must be killed first, and the like. Overall, a fun shooter that's not Raiden, but is enjoyable in its own right. 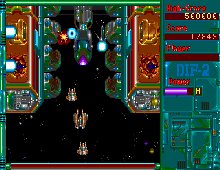