RayCrisis is a good-looking vertical shooter from Taito that is not as good as G-Darius or games in the Gradius series, but still packs enough variety to warrant a look. This download is the rare PC version that was released only briefly in Japan.

One of the best things about RayCrisis is the wide range of pretty 3D environments, ranging from futuristic cities to a desert to a confusing cyber-grid construction (my favorite level). There are two play modes in the game which are not so different from each other. In Original Mode, you can pick the three levels that you want to play; in Special Mode, you must play through a given set of levels, starting the game with zero lives and no continues. In either mode, you can pick between three differently equipped ships, called Wave Runners. The three ships are called the WR-01R, WR-02R, and WR-03, and are each equipped with a different main gun, have different lock-on abilities, and a special attack weapon that can be fired once the special attack gauge is at full strength.

The game is more than a few notches more difficult than your average shooter, with swarms of enemies constantly filling the screen and challenging bosses. If you take too many tries to defeat the final boss, you will see a suboptimal ending for the game - an interesting innovation. In another innovation that harks back to school days, you are given a letter grade at the end of each level, and an overall grade at the end of the game. In terms of the number of levels, RayCrisis is quite short. But it doesn't mean you will breeze through the game in only a few hours, because as mentioned earlier it is quite difficult - moreso if you want a better grade than 'C' or 'D.' As was the case with RayStorm, the previous title in the series, the backgrounds in RayCrisis comprises huge 3D polygonal objects, with several scrolling layers and jaw-dropping lighting effects. While it is a solid shooter, RayCrisis feels like a 'B movie' compared to classics like G-Darius due to the much more limited variety of weapons and power-ups. If you like shooters and have already played all the hit games, RayCrisis will entertain you for a while. Just don't expect it to be the next best thing since G-Darius. 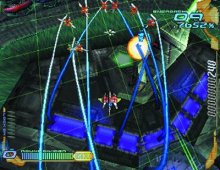