Take No Prisoners is a decent action game with a different approach to many things. In short the game is just another action shooter where you have to kill enemies like seen with in games like Doom and Quake. The game does have a decent story as you get different kind of information by locating computers and when getting access to them you are able to read parts about what is going on and sooner or later being able to put the different parts of information together.

The main difference from regular 3D shooters to Take No Prisoners is the graphical overview as you see the top meaning that you can't look as far as in other games but it does mean new challenges and it is a nice change compared to all the regular Doom clone kind of games. The graphics are okay but often too blurry and it makes it hard to see whether you actually hit your enemies when you shoot at them. There are different kinds of weapons included and you can switch between them the same way as with all the other popular action games.

Overall a nice action game but it doesn't reach the same high quality as a game like Doom or Quake. The different approach to the game overview also offers new ways of playing an action and general fans of the action genre will find many hours of entertainment with this game.

Take No Prisoners is a refreshing 3D shooter that takes an interesting perspective on the genre - both literally and figuratively. True to their reputation as one of the most innovative action game companies today, Raven Software produces in Take No Prisoners a great mix of action, adventure, and even a little bit of strategy, all served up inside a cool post-apocalyptic plot. As the game begins, you learn that nuclear warheads and radioactive fallout have transformed San Antonio, Texas, into an irradiated hellhole, full of mutants not unlike the denizens of Wasteland. You play Slade, veteran mercenary who has been recruited by The Man to infiltrate a mysterious, center-city dome. Once inside, the goal is to retrieve a special crystal and come back alive.

The most striking feature that sets the game apart is the playing perspective: all of the action in Take No Prisoners is viewed from an overhead floating camera, which follows your movement. While at first glance the game may appear to be little more than a bird's eye view version of Quake, there's a good deal of depth below the surface. Similar to Looking Glass' classic System Shock, the storyline progresses when you read personal logfiles stored on computers, and solve a few physical puzzles that are more intelligent than the idiotic "find yellow key to open yellow door" variety. As you progress through the game, you will travel between areas (totalling over 20) via various vehicles you uncover during your investigation. As opposed to the very limited "move to the next level" design in most games, here you can travel between areas in a real-world fashion, similar to Strife.

Graphics are appropriately dark and moody, and the control is very responsive. A 3D accelerator will jack up game's the frame rate while adding (obviously) much more graphical detail, although it looks great even without one. Internet play has been implemented via the RedOrb Zone interface (which, as of this writing, has been discontinued). The game features over 20 different weapons, including assault rifles, pulse cannons, laser rifles, molotov cocktails, grenades, flame throwers, and many more. Controls are customizable, fighting is simple enough to master, but managing your other devices takes a little getting used to. Your character comes equipped with a PDD, a Personal Data Device that contains mission data, and anything else you can download into it. It's a great way to collect maps, security codes, notes, and any other useful information you run across. The top down perspective is a very neat way to control the game: it works very well, and makes it easy to plan attack and defense strategies.

Though it has its problems here and there (mostly regarding sluggish frame rates and uninspired multiplayer options-- both of which are now moot, with today's fast computers and the demise of RedOrb Zone), Take No Prisoners is different enough -- and fun enough-- to warrant a look by all action fans. It may not be the end-all of blast fests, but it's a welcome departure from scores of Quake clones, and offers a good and solid ride while it lasts. 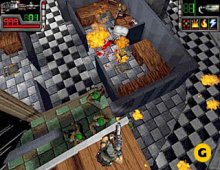