Trog is a cute little Pac-Man-style game with a difference. Despite the strong déją vu effect when you first start the game, it won't take long for Trog's charming claymation and surprises to glue you to the screen.

The object of the game is simple: as a fledgling Tyrannosaurus, you must collect all the eggs on each level to open up the exit to the next. Along the way, you must avoid hungry cavemen who roam the level, as well as other obstacles... some of which are quite funny-- no, I won't spoil the surprise-- to watch. From time to time, a special item appears that you can grab to turn into a giant, menacing Tyrannosaurus Rex. This transformation allows you to eat the cavemen as opposed to avoiding them, and it usually lasts long enough for you to eat them all :) Every few levels or so, the game introduces new elements of surprise, power-ups, and new enemies. Unfortunately, these power-ups make the game a bit too easy, and most people will find it a cakewalk until level 15 or so. Still, the unique sense of humor and "extras" make the game a very enjoyable experience that rivals the arcade version.

Now this is an awesome game!! You play some kind of tiny little T-rex who has to collect the red eggs in the a level to proceed to the next. Of course there are some obstacles like very dumb walking dino's. You can pick up bonus stuff to help you in the level. One very cool bonus is some kind of pineapple. Once you picked it up you become twice your size; an angry T-Rex which eats everything in the level including the other dino's. The graphics are stunning. And the gameplay is just fabulous. You can play it with 2 players. 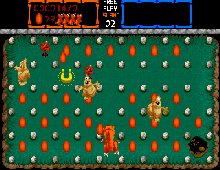 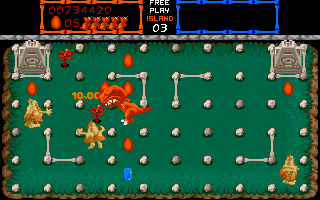