Let me start by adding the description from the developers as they explain what Tanks 3D really is, "Tanks 3D is, you guessed it, a 3D tank action game that supports LAN/Internet/single player play. It's tough, addictive and fun. It randomly generates new scenery to keep the odds fair, keep the odds favourable, and make it worth playing over and over again. So pick a fight with somebody and challenge them to a duel; it's worth the brawl."

And I can only agree wit the above as Tanks 3D is a fast paces tank action game where you have to move all the time as you will otherwise be blown up by the other tanks. There are several different weapons in the game including missiles, cannons and mines. The controls are easy as you can use the arrow keys and the keys you shoot with are right next to each other. The game area isn't very big which makes the battles much more intensive s you can't really flee. Some don't like this as they can't use a defensive tactic and others love this as they can then chase the enemies around on the little map.

The graphics are simply excellent and fits very well to the game. You can choose different resolutions and graphics which of course help on the graphics. Well matching sounds are included as well. Overall a great action game that you can play for as little as 10 minutes and both against the computer and in multiplayer mode. A recommended game if you are looking for a small game that can be played in multiplayer.

As the name implies, Tanks 3D is a 3D tank action game in the same vein as Atari's classic Combat arcade hit. What makes the game special is that it supports multiplayer play via the Internet, which lets up to 4 players play either as teams, or in deathmatch mode. Another neat feature of the game is that it randomly generates scenery to make the game more replayable and the action less predictable. The default Direct3D (i.e. without 3D card) looks good, and owners of 3D cards will be treated to excellent effects such as ray-traced missiles and very smooth animation. Too bad hotseat mode is not available, but at least the Internet play works very well, and there are plenty of computer tanks to engage you in a quick-and-dirty action when you can't find other players to play it with. If you like Atari's classic, you will enjoy this excellent modern remake. 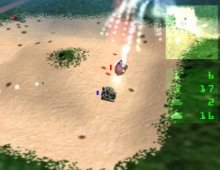