TankWars 2.0 is a fun artillery game for up to 10 players. The goal will be familiar to anyone who has played Scorched Earth or Gorilla: opponents attempt to destroy each others tanks by firing various weapons at them. Pick a weapon, then choose an angle for its trajectory. Whenever you hit an enemy tank, you will gain points. Terrain, gravity, and the opposing tanks' weapons and relative positions to you are some of the factors you need to consider.

In addition to the fun and familiar gameplay, TankWars 2.0 adds a lot of bells and whistles to make the replayability much higher. In addition to numerous weapons, there are also 5 different computer AI for you to compete against. You can even determine the error rate of computer-controlled tanks - a good way to adjust difficulty level. The graphics are standard VGA with no frills, but it's more than enough for the purpose of just blowing things up ;) Recommended! 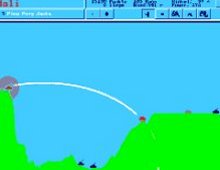