Tankgame is a fun freeware remake of Atari's arcade hit Tank (later released for Atari 2600 console as Combat). Like other Atari classics, the game is very easy to learn, but amazingly addictive. The concept was as old as tank warfare itself: two tanks?one red, one green?roll and turn around a maze of obstacles and land mines, trying to shell each other and not be shelled themselves. The game is timed, with points awarded either for blowing up the other tank, or watching your opponent foolishly roll across a land mine. Various obstacles on the screen make the game more challenging.

This fanmade version is quite fun to play, with additional elements that were not present in Atari's version. There are many kinds of extra weapons and armor you can collect, including some that require ammo. You can play against another human player either in hot-seat or even null modem mode. The tank physics is a bit disappointing, though - the tanks move a tad too slowly and take a long time to turn. Perhaps it's a nod to realism, but I definitely remember Atari's tanks as being more nimble.

Despite some minor flaws, Tankgame manages to retain much of the fun in the original classic; at least, it's much better than Infogrames' 2001 remake of Combat, an abysmal entry that has none of the original's charms whatsoever. Recommended! 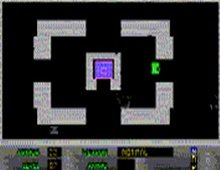