Star Wars II is a decent fanmade vertical shooter set in the Star Wars universe, made by a fan in Korea. The premise is definitely not the focus here, as you will fly rebel fighters such as the X-Wing and Y-Wing against both the Imperial ships AND ships on the same side, including the Millennium Falcon (many of them in fact), Calamari cruisers, and so on. The emphasis is on nonstop action, though, and here Star Wars II is pretty good... although the game is unfortunately too easy and too repetitive after a while. Enemy ships fire the same kind of primitive-looking bullets, for example, and even those new to the shooter genre will long for a more challenging game. The game deserves credit for including as many ships from the Star Wars universe as the designer could manage, although it's not enjoyable enough to last more than a few minutes of nonstop fingers-on-the-fire-button action. 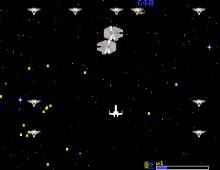