This is the never-released PC version of a console side-scrolling platform game from LucasArts. The game follows the plot of the first Star Wars very closely-- as Luke Skywalker, you must fight your way from the sand dunes of Tatooine to becoming an X-Wing pilot and participate in the attack on the Empire's Death Star. German licensee SoftGold developed the PC version on their own and tried to convince LucasArts to release it. LucasArts declined, sensing (quite correctly) that the game would not do well on a PC. A good game, but pales in comparison to Rebel Assault, its de facto replacement. 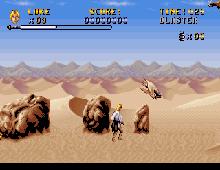