This is the earliest Star Wars-game I know of, maybe I'm wrong, but regarding the fact that this is designed for XT-Computers and only uses 4-color-EGA-graphic (maybe CGA, but I'm not sure) this is really a nice piece of work. It can't compete with games like X-Wing or Tie-Fighter of course - not by far, but it's still close to be called a Sim as it tries it's best to simulate a 3D-Effect on the hardware of the ancient days.

The game itself isn't bad - pretty simple but fun (once you've found a working setting with moslo - just work on Starwars.bat which I created with a setting that worked well on my system). Well, a sure must for all Star Wars-Fans out there, all you others - erm... don't expect too much. It's a historical piece of 3D-programming, but not really a delicious meal for a 3D-graphic-card-with-32MB-memory-andwhateverelse-spoiled gamer of the modern days.

The first PC game ever made based on the blockbuster series, Star Wars is a primitive-looking first-person shooter that is nonetheless a very good conversion of the Atari arcade game of the same name. The game puts you in the role of Luke Skywalker, in the X-Wing cockpit, fighting wave after wave of the Empire's TIE Fighters in a dramatic space drama that culminates in the attack on the Death Star itself. The furious, non-stop action, good controls, and just the cool feeling of piloting THE Millennium Falcon makes up for the primitive wireframe-only graphics. Star Wars was great fun for its time, and still stands up well years later with modern shooters in terms of pure mindless fun. Too bad nobody would be able to fly Han Solo's Millennium Falcon in a PC game until LucasArts' expansion pack for TIE Fighter almost a decade later.

You wanna know what makes Star Wars so popular? It's that every god-danged person on this PLANET wants a light sabre. Don't deny it because you know it's true! This game has no lightsabres (Jedi knight does though, so go buy that), instead it's scope is limited to the assualt on the Death Star which took place at the end of A New Hope. Firstly you must take on a wave of Tie Fighters (how many ships depends on the difficulty level you have it on) and then fly down the Death Star trench to take out the exhaust port and win the day for the rebellion. Repeat this over and over and over again.

Visually the game is nothing flash by todays standards (did you expect anything else?) consisting of 16 colour vector graphics. The game is fun to play for a while but gets boring quite fast. Fun as hell the first few times you play it. 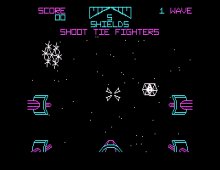