Ka-BOOM! Flames burst forth from the newly-placed atomic bomb and the train is now nothing but melted steel and ash. "Mission successful!" dominates the screen, as your tank happily drives off the screen. This is Tank Arena, a nice game, not much of an arena in single play, but multiplay kicks butt.

Graphically the game is generally nice. The background before the menu is a nice image of 3D rendered tanks. Too bad the game's vehicles aren't like that, but hey: it's freeware, and it's in DOS! Great music at the menu, but lacks music in-game. If there WAS music in the game, you'll never hear it over the speaker-shaking explosions, rattling gunfire, and roaring tank engines. Controlling one of the few vehicles is not too difficult, but can get a little hard when it comes to controlling the turret on the two available tanks: practice makes perfect! Of course, the built-in level/mission editor is a great asset to the game. Create some missions with lots of things to kill on your spare time, or put together a crazy death match level for you and your friends to compete on.

The missions in the game are quite good, with briefings beforehand and unique objectives. One example is to destroy a train before it exits the map, as opposed to objectives such as in Carmageddon: kill everything and don't get killed. One original twist to the single play are the few strange missions you must complete, such as a race track mission (where you are in a race car, as opposed to the usual tank and plane) or the shopping mission where you must control the shopping cart and pick up the products listed in the briefing! The single play sucked a lot of time out of my life, but I enjoyed it thoroughly. Multiplayer is great, but lacks an important quality. This lacking quality is network play: Tank Arena does NOT have any sort of computer-connection multiplay. It only has split screen multiplayer, which makes me angry. Split screen multiplayer has EVERYTHING from "Capture the Flag" to Co-operative missions. Heck, making your own scenarios and completing them with your friends is a lot of fun. If Tank Arena had network gaming, I'd be quite happy. Tonnes of fun split-screen multiplayer in this game is, race against your friends if you don't feel like killing them 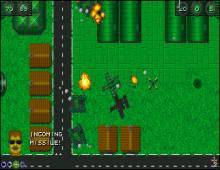