Although it seems incredulous that a straight conversion from a classic non-PC game could fail to be as much fun, that is what Pinball 2000 is: a pale ghost of the game it was "derived" from. While the graphics are faithful to the original, there seem to be even less to do on either table, and the animations and physics leave a lot to be desired. If you want to play a great pinball game, play the much better straight PC conversion of Pinball Dreams than this inferior version. 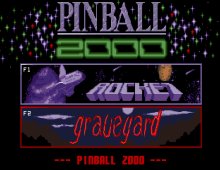