Another Real Dog from Capstone, who tirelessly acquired lucrative movie licenses and churned out horrible games based on them -- and they never seem to learn, either. Surf Ninjas is no exception. But what makes the game worse in this case is that it is based on an equally bad (or perhaps even worse) movie. Here's the story: two surfer brothers discover their princely past and are magically transformed into awesome ninja super-dudes. That's really pretty much it.. the rest of the movie is spent showing off their "martial arts" skills that look more like frog dancing.

The game is a typical side-scroller beat-em-up, starring you as the surfer dude. Levels follow events in the movie, although since there is little plot to talk about, it doesn't really matter. The backdrops are better drawn than Capstone's other games, but the action is still awful. Characters are blocky, controls are bad, and enemies are incredibly repetitive ("how many ninjas can I fight before getting bored?" is the right question to ask yourself). The game gets a little better once you can transform into a ninja and have access to cool ninja weapons, but not by much. Overall, another pretty bad entry from a company notorious for butchering movie licenses.

This is a bad game based on a movie, where game is a typical side-scrolling beat-em-up game, where you are transformed into a ninja where you got to beat-up other ninjas over and over until you get bored. Later on you'll get some weapons too, but that's it. 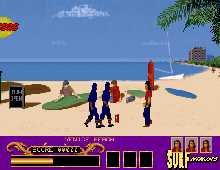