Terracide is a fun 3D action game in the same style as Descent, although admittedly not as good. The plot is the "kill the evil aliens" cliche you have seen countless times, and the gameplay will be familiar to anyone who has played Descent before. You control a futuristic craft from the first-person perspective, and move with 6 degrees of freedom inside claustrophobic levels, blasting all the baddies in sight. You will fight your way through 20 levels on 7 different ships, each bigger than the last, each level sporting deadlier enemies. Along the way, you pick up power-ups and more powerful weapons. Again, there is nothing new here.

Although Terracide certainly doesn't break any new ground in the crowded FPS/3D action arena, it has plenty of neat effects and fun levels. The gameplay, as you would expect, is fast and furious, and the AI is reasonably good: enemy ships rarely stay in place like sitting ducks, and will find cover and ambush you in tight spaces. The game is also very friendly to beginners: if you find 6 degrees of freedom very hard to control, you can turn on the auto-leveling feature and the auto-pitching feature. These options help level your ship, both horizontally and vertically, with whatever space you are fighting in. Advanced players who leave these options off will, naturally, have complete control over their craft. They can also turn on inertia for added challenge. With inertia on, your craft will behave much more realistically (for example, you can no longer suddenly stop your craft while accelerating), making combat much more challenging.

Descent fans who love the game but find it too claustrophobic will be happy to know that a considerable portion of Terracide takes place in outer space. Unfortunately due to inadequate radar feature, I found it very difficult to locate the last 2-3 enemies left. All in all, though, Terracide is a fun space combat game that serves as a nice diversion from Descent. The auto-leveling and auto-pitching features will appeal to newbies who find Descent too confusing, while expert gamers can set the difficulty level to "impossible," turn inertia on, and have fun blasting away. 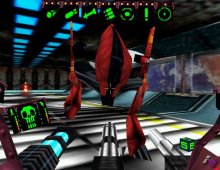