Nightmare Creatures is a great horror action/adventure game in the same vein as Resident Evil, but with much more emphasis on action than puzzles. Aside from some annoying quirks, such as the lack of proper save game feature (a remnant of the Sony Playstation version, which was the original for this PC port), the game is a very enjoyable action fest with more depth than many FPS titles. Brett Todd of The Games Domain sums up the good and bad about this fun game very well in his review:

"Blending spectacular 3D- accelerated graphics, smooth flowing action, and an immersive back story, this game is one of the best that I've played in some time. The atmosphere of gothic horror is perfectly captured with a flawless blend of evocative visuals and moody sound, and the game is a worthy heir of such classics as the first Alone in the Dark and the early Castlevania titles for the old Nintendo.

The story behind Nightmare Creatures is simple, but very engaging if you have any interest in gothic horror. It all begins way back in 1666, when a devil worshipping cult called the Brotherhood of Hecate was conducting sinister experiments in London. In order to take over the city, and then the world, the Brothers tried to develop a potion that would turn them into supermen. [But] instead of creating the master race, the Brotherhood cranked out a bunch of, well, nightmare creatures instead. Fast forward to 1834, when evil doings again envelop London. Citizens start turning into monsters. The dead walk. Nobody knows what to do until an old book is dropped off at the home of Ignatius Blackward, a priest and occult expert. He soon discovers that the tome is the secret diary of Pepys, which records all the nasty doings of the Brotherhood. Knowing he needs help, Iggy then mails the diary to an expert immunologist (in 1834!) named Dr. Jean F. Showing up with his hot daughter Nadia in tow, the good doctor is promptly murdered and the book stolen. At the funeral, Iggy and Nadia are approached by a man who gives them a note reading: "Know about Adam Crowley, Brotherhood of Hecate --- HVHJ". On Oct. 17, 1834, the two of you head out to an address listed on the note, hoping to have a word with Mr. Crowley and maybe kick a little monster ass along the way.

When everything is set up to your liking, all that remains is choosing between Ignatius and Nadia before hitting the streets of London. Choosing between the two is really a matter of personal preference, as they aren't all that different in gameplay. Ignatius is bigger and stronger, but Nadia is much quicker and more agile. Their attacks reflect this appropriately, with the big priest being better at wading into the fray with his longstaff, and the smaller gymnast excelling at staying on the fringes until she leaps in with sword or feet flying. Special attacks individual to each character also show these differences. Both regular and special moves can be performed with various button combinations and none are of the impossible variety.

A wide selection of power-ups can be found throughout Nightmare Creatures. Some are hidden in conveniently marked boxes, while others are tucked behind windows, and others still will pop out after you kill off a monster. These range from health bonuses to a variety of useful weapons. Single shot Guns are good for taking out most individual enemies, while the Multi-Gun, which fires a round in all directions, is great when you're being gooned by a crowd. Other items there for the picking include Firebombs, Dynamite, and Repulsive Smoke, which repels monsters. Everything remains in your inventory until you use it, so you can stockpile useful trinkets like those Multi-Guns.

Even with [some] adventure-type elements, Nightmare Creatures is really all about combat. While this game may be following in the footsteps of Tomb Raider, the influence of pure fighting titles like Virtua Fighter is very recognizable as well. All of the game's levels feature a menagerie of beasties that have to be kicked, bludgeoned, and stabbed into submission before you can resume your hunt for Crowley. The sheer number of creatures is very impressive, and all thirteen feature very different methods of attack. Common enemies like Zombies just stagger forward and flail away, while Werewolves leap around you and slash with their claws. The Hulk-like Dockers pack a wicked roundhouse punch and will also smash the ground, sometimes bringing the ceiling down on you. This impressive amount of variety means that Nightmare Creatures never gets repetitive even though the majority of game time is spent walloping one bad guy or another. To really succeed --- particularly in the later levels --- you need to handle each one differently. If you just wade in every time, and try to take out a Docker the same as you would a Spider, you're going to spend more time loading saved games than actually playing. There are also special boss monsters, such as a giant multi- headed snake and a yeti, that have to be outsmarted every few levels as well.

I have no hesitation recommending Nightmare Creatures to anyone interested in arcade action of the Tomb Raider sort. The lack of a true save game feature, the occasionally erratic controls, and that adrenaline time limit keeps this one out of the awards category, but I do hope that people will still give it a try. For atmosphere, gameplay, and eye candy, this one is hard to beat." 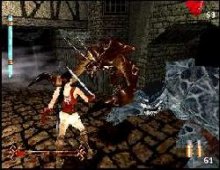