Squeezils is a fun and innovative 3D action game from Protozoa, a small and now-defunct developer better known for making short eye-catching 3D animated clips in mid-1990s. Although billed as an "action adventure," the game is really a straightforward 3D action game that platformer fans will feel at home with. The wacky plot: you control a Squeezil, a fantasy creature who looks like cross between a squirrel and a beaver. Like real squirrels, Squeezils do anything to get their grubby hands on walnuts, and your Squeezil is no different. But since the Great Shuddering Nut (no, I'm not making this up), every Squeezil has been crazy collecting gold nuggets to bring to the Great Shuddering Nut in return for strange treasures from faraway lands. Your objective is to make your way to the Great Shuddering Nut, by traveling through the seven regions of Nutsville, collecting nuts, gold nuggets, keys, and ancient relics along the way. Each region has 5 to 8 different levels (38 total) that present its own dangers.

The game is played from the first-person perspective, with attractive 3D graphics. You can freely explore each environment, climbing up trees and even flying from branch to branch. You find nuts on the ground and in the trees. You can also mug other Squeezils for nuts by either knocking them out of another Squeezil's grasp by sliding into him, or hitting him with a splitting nut. You also have to avoid other Squeezils who will try to steal your nuts, and other predators. The best way to avoid predators is to wait inside the protective cover of trees until they go away.

You begin your journey in the River Valley which contains 8 levels for you to explore, and 4 portals that take you to other regions: the Pine Canyon, the Desert, the Jungle, and the Coast. Use your compass to navigate your way to portals that take you to each of these four regions. In each of the four middle regions, you must find the 3 keys which will grant you the ancient Squeezil relic for that region, and open the portal door providing you safe passage back to River Valley. Acquiring all four region relics opens the portal entrance to the Ancient Tomb of Jeff where things begin to get strange. Survive the perils of The Tomb, and you will make it to the utterly bizarre world of Nutsville, where The Great Shuddering Nut has landed, ready to receive your gifts of homage, and endow upon you the rewards of your victorious efforts.

While the game is innovative and quite fun at the beginning, thanks to complete freedom of movement and bizarre premise, it gets repetitive quite quickly after the novelty wears off. Sliding into other Squeezils is a lot of fun, but I find the game as a whole far too easy - the only challenge lies in finding keys and portals, which can be a chore. At the end of the day, Squeezils is worth a look for its unique premise, but it may most appeal to young gamers in your house who have more tolerance for repetition, and who will be attracted to the game's cartoony charm. 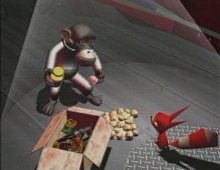