One of the best PC conversions of PlayStation games, Pandemonium! is a great platformer that tells a story about a jester and a sorceress who inadvertently summon a giant monster, and so must get rid of it. As either the jester or the sorceress, you?ll jump around levels avoiding hazards, creatures, and traps, while collecting treasure, keys, and power-ups in standard side-scrolling fashion. Instead of the gritty shoot-?em-up style of Blackthorne or Flashback, Pandemonium! takes a less violent route where dangers such as hopping mushrooms and menacing snails are dealt a fatal blow simply by jumping on their heads. Additionally, both characters can use a variety of magical spells (though you can only carry one spell at a time) to dispatch their enemies.

Although the game is addictive and fun, it is probably too difficult for all but the most die-hard players. Both characters have only two hit points each, and nearly everything you touch is lethal. Touch a stalactite, lose a hit point, bump into a plant, lose a hit point, etc. And if you?ve struggled to obtain a spell, you?ll lose that ability if you take any damage. Ordinarily, this could be seen as a way to challenge the player to do well and not get hurt, but when you take into account the size and complexity of the levels and the use of a silly post-level password system, things get ugly very quickly. What is worse, the game retains the save-point-only-once-in-a-blue-moon style of the PlayStation original, which means you will probably have to replay significant chunks of the game if your reflexes are anything short of a lightning bolt.

Overall, Pandemonium! is a great game, but one that amateur gamers need not apply. Die-hard arcade gamers will find the game quite challenging, and very well made. The game's cutscenes are very well done, especially the ending (I'd say why, but I wouldn't want to spoil the suprise). The music is also great, the sounds are well chosen, and play control is solid. Pandemonium! is also one of the first games that offer true 3D graphics, combined traditional 2D gameplay. A great old game that shouldn't have been forgotten. 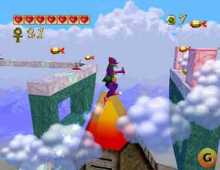 People who downloaded this game have also downloaded:
Pandemonium 2, Out of This World (a.k.a. Another World), MDK, Prince of Persia 2: The Shadow and the Flame, Oddworld: Abe's Exoddus