Pandemonium 2 is a solid sequel to Pandemonium, one of the best platform games ever created. Although more evolutionary than revolutionary, Pandemonium 2 offers the same addictive gameplay as the original, with even better graphics. The game begins where the first game left off. The Comet of Infinate Possibilities has returned and encased within is a source of magic with unlimited power. An aspiring sorceress called Nikki wants to harness that power to become the world's greatest sorceress. Meanwhile, Fargus (lead character from the first game) has slowly degenerated to being almost completely insane, and Queen Zorrscha is using her minions to build a fleet of rockets to fly her to the comet. In a twist to most "kill evil, save world" plots, your quest is to stop the Queen from using the comet's power to.... bring freedom and happiness to the land. That's right- you are the bad guys in Pandemonium 2, and it's the quirky humor such as this that makes the game (and every other Crystal Dynamic title, for that matter) unique and a lot of fun to play.

You control either Nikki or Fargus, each of whom has unique abilities. Fargus starts off with a weapon called Sid, the talking stick (also sidekick) which can be controlled like a remote-controlled missile after being thrown. Fargus also has a spin attack, although it is not as fun to use as Sid. Nikki does not start out with a weapon other than jumping on people's head. She can, however, collect various magic spells that allow her to throw different projectiles. Nikki also can do a double-jump which allows her to reach higher heights than Fargus. This makes the game somewhat replayable, as one character can access areas the other cannot.

In short, Pandemonium 2 offers all the gameplay and control one could ask for in a platformer. The game looks great in 3D, with graphics that rival its Playstation version (which was much more successful than this PC one). If you enjoy the first game, you will definitely enjoy this sequel. If you like action games but have not heard of either games, you are missing out on two of the most unique and entertaining games ever made for the PC. 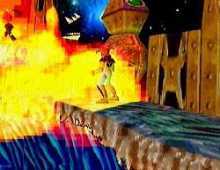 People who downloaded this game have also downloaded:
Pandemonium!, Jazz Jackrabbit, House of the Dead 2, The, Blood 2: The Chosen, Oddworld: Abe's Exoddus