One of the best platformers to grace your PC screen, Jazz Jackrabbit was a very successful platformer by shareware standards, released by Epic Megagames in 1993 and spawned a number of well-received sequels. Similar in style to Earthworm Jim but released years ahead of that classic, Jazz Jackrabbit features a lovable cartoon protagonist, 4-button joystick support, well-designed levels, excellent graphics, and funny animated sequences.

As Jazz the cool rabbit hero, you will travel from planet to planet to reach a villainous alien turtle who is bent on world destruction. While the game's vast levels, secret areas, and inventive power-ups already add up to an addictive game, to me the best part about Jazz are the bonus levels which are all presented in full 3D, in contrast to the 2D sidescrolling view. These 3D levels make you race headlong through a racetrack within a given time limit to amass bonus points. Attractive cartoony graphics and a great sense of humor make Jazz Jackrabbit arguably the most charming platform superhero... until Earthworm Jim showed up on the scene. Highly recommended, and be sure to also check out the game's sequels on this site. 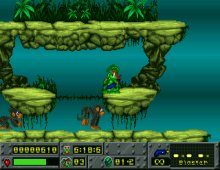