Epic Megagames developed "Holiday Hare" versions of their popular platformers Jazz Jackrabbit and Jazz Jackrabbit 2 as freeware releases to celebrate the holidays. Each game is populated by X-mas themed levels and festive sounds, and features the same furry rabbit hero as the shareware games. The 1995 version of Holiday Hare is based on Jazz 1 engine, and features four levels with new graphics and sound, including a rap version of Little Drummer Boy. The 1998 version is based on Jazz 2 engine, and lets you play as either Jazz or his brother. There are no bosses in the game, although the zaniness of the levels more than make up for their absence - and anyone who found the shareware games too difficult will find Holiday Hare a welcome change. Highly recommended, especially for fans of the original games. 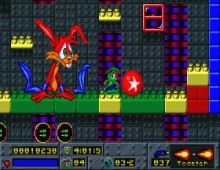