The gameplay is still the same as Jazz 2, which means you can expect a lot of well-designed levels, funny enemies, and addictive gameplay. The levels in this release is even more devious than Jazz 2, with a lot more secrets and alternate routes that boost the replay value even higher. I feel TSF is much more difficult than Jazz 2: even at the easiest difficulty setting, I still have a hard time finishing each level. This is due mostly not to tough enemies (which are even sparse on some levels), but to devious little physical puzzles and challenges that you need to figure out. You can play the campaign mode, i.e. all the levels in order, or 20 of the best levels submitted by Jazz 2 fans.

Similar to Jazz 2, TSF also includes it's own standalone editor, thought it's not as easy to use as the actual game. But the best news for die-hard Jazz 2 fans might be superb multiplayer support: up to 32 players can play simultaneously over the Internet or LAN. You can even play the game in hotseat mode, with several gamepads hooked up and two players on keyboard. There is also a great variety of multiplayer modes not dissimilar to today's FPS games, including battle mode, capture the flag, and others.

All in all, The Secret Files is a great ending to an excellent series. Its addictive, nonstop action, wonderful sense of humor, wacky levels, and superb multiplayer should make it a permanent resident on the hard disk of every platformer fan. Highly recommended! 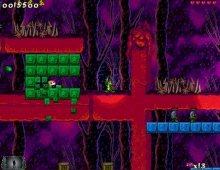