Stryx is an ambitious multi-type action game with some puzzle elements (similar to Epyx' classic Impossible Mission 2) that unfortunately is bogged down by poor platform action levels. The plot, which is almost superfluous in this type of games, is about another cliché Cyborg-vs-human conflict. You are Stryx, the most advanced Cyborg created to be mankind's last chance against the Cyborgs. Your job: find four keys that would activate the termination system called "Lifeforce." Once activated, the Lifeforce would destroy all robotic and computer systems ... naturally taking your life in the process. But hey, why refuse a chance to die a martyr especially if you have no choice in the matter? ;)

Gameplay alternates between typical 2D sidescrolling platform action and shoot em-up sections. Although the shoot em-up sections are a lot of fun, the platform action which makes up the first and biggest part of it is so unbelievably appalling that very few people will ever bother to progress to get to the shoot em-up parts. As Stryx, which is just a small little sprite in the game, you will trudge aimlessly around a lot of repetitive scenery, taking the odd potshot at big but lifeless enemies with your ineffectual little gun. This is thoroughly disappointing especially for a game from action powerhouse like Psygnosis. The shoot em-up sections and some interesting physical puzzles near the end are what save the game from Real Dog, but not enough that I could unconditionally recommend the game. If you are a Psygnosis fan, there are simply far better games they made than this old game. 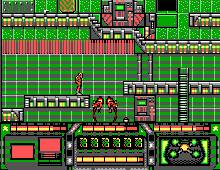