Star Castle is an excellent freeware remake of the arcade hit of the same name back in the early 1980s. The plot, from the official Vectrex manual, goes as follows: "You and other experienced intergalactic voyagers have heard about and shared the legend of Star Castle -- a mysterious fortress in a far away galaxy filled with incredible riches and surrounded by revolving walls of shimmering solid gold. Yet no one, until now, has ever actually seen the Castle -- or lived to tell about it! As you approach, you are overwhelmed with the beauty of the Castle but you suddenly realize that the golden walls hide a deadly arsenal. To survive you must destroy the walls and the powerful Energy Cannon they shield. Perhaps you will be the first to survive the Star Castle's arsenal and prove the legend true. Perhaps not!"

This PC version remains true to the arcade classic, down to the primitive-but-cool-looking vector graphics. Your ship flies around a larger ship surrounded by three rotating rings, with the center ring rotating in the opposite direction of the inner and outer rings. Each ring is composed of multiple segments, which must be shot twice to destroy. Wipe out an entire ring, and a new one will grow in its place. You can shoot small sparks that jump from ring to ring and to the air to pursue you. When a gap in all three rings lines up between you and the central ship, it emits a large, electric-sounding fireball that must be avoided. Sneak a shot into such a gap and hit the center ship to destroy it, earning an extra life and a new castle to chip away at. The game looks great, plays smoothly, and is challenging enough to keep arcade experts hooked. In short, Star Castle is an almost flawless remake of the addictive blockbuster that is a must-play for all arcade fans. 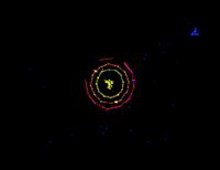