"Stick Figures Wield Guns In Bizarre School Sketch-Book Shoot Out." Ultimately not as satisfying as Liero, this game is still recommendable. Although only one-player, you can play in teams or one-for-all deathmatch, a different executable for each mode. The weapon selection is nice enough, the controls work well, and flying around with the jetpack is fun. However, it can get pretty frustrating due to the jumpy nature of the computer players, and the map editor is a bit too hard to use.

But if you want to snipe off the helmet of a stick man, then uzi off his head (with the body wandering around in search of it for a few seconds) where else can you go? And with a fanbase exchanging levels and mods, it's a nicely customisable game.

A diversion for those who really, really hate doodles. 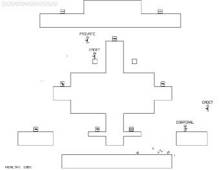