Stick Soldiers 2 is the sequel to Stick Soldiers, a fun multiplayer shooter reviewed elsewhere on this site. This time, the 2D graphics has been enhanced with more animations, and you have even more weapons at your disposal. The best addition is the "team death match" multiplay mode, which lets you team up with your friends to wreck havoc on other teams.

The basic idea of the game remains the same: run around and pick up different guns to kill your opponents. In addition to new character graphics and weapons, this sequel adds welcome customizability: you can now change your name, sounds, and graphics modes. Sound and special effects have also been enhanced - you can now see a cool Max Payne- style 'bullet time' effect. Last but not least, Stick Soldiers 2 comes with a level editor.

There are still some problems with the game, but they are minor. Controls, especially flying the jetpack, are still hard to get used to. With plenty of fanmade levels and mods, charming stickman graphics, and addictive gameplay, this game deserves to stay on your hard drive for years to come. Highly recommended! 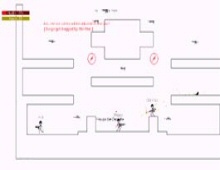