Splinter Source is a fun fanmade game based on Splinter Cell. Similar to Codename: Gordon and DOOM 2D, Splinter Source presents a dimensional shift from 3D to 2D. In the author's words: "You don't play as Sam Fisher, but instead some nameless agent out to retrieve the OBJECTIVE that was stolen by a group of 'terrorists' who are now holding cargo bay as their base. Most of Splinter Cell's stealthy moves have been recreatd in 2D. Knock guards out from behind or drop down on them form above, hide in the shadows, shoot people from the ceiling etc etc. The game is very open ended - there are several ways to complete the mission. Make sure you read the objective and study the map carefully. This game was originally made as a high score arcade game so the end score really doesn't matter."

Coded as an entry to an on-line game making competition, Splinter Source has only one level and can be played only in a small window. But the level is extremely well-designed, and the open-ended nature of the game means you can replay it multiple times to try out different strategies. Highly recommended to fans of Splinter Cell, Metal Gear, or similar espionage titles. 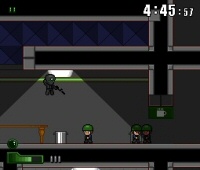