Turrican - the legend continues. The game is still pretty much the same. You control the wellknown one man tank who shoots his way through aliens, robots and alien robots. The great gameplay from its predecessor remains unchanged. The graphics are marvellous - this is a true Amiga classic. The PC version of it is also great - but you have to play it under Dos. The graphics are almost identical.

As usually I don't know what to write about this action game. There are five worlds to play in, each with an uberenemy at the end of it. Many extras to collect to increase firepower and similar things. The story is something like our hero's space ship being invaded by mutants and everyone but him getting killed. Taking one of the Turrican suits on board he sets out to get revenge.

If you like light (not to be confused with easy) action games then this is the one. Some jumping and running - no brutality as in some modern games. Nice one.

Ok, let's face it: Factor 5's Turrican II was one of the best games to see its light on the Amiga and is probably the best action game ever produced on any platform. 4 years(!) after the initial Amiga release, Rainbow Arts released the IBM-PC version of this classic shooter with very little fanfare. How does it compare to the Amiga game? Well, surprisingly not that bad at all. Scrolling is ultra-smooth, gameplay is nearly as good as in the original game, and the graphics - though slightly changed to the Amiga game - are great. I can't tell about the music as I didn't get the music to work on my PCI soundcard, but I suppose Sun-Project used a TFMX playing routine to reproduce the original Amiga music on the IBM-PC port and that, of course, would be great as the music was one of the best ever heard in a computer game. 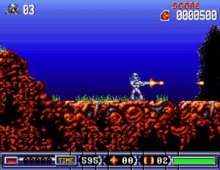