A great conversion of Bitmap Brother's Amiga classic, Gods is a very stylish platform game that is famous for offering many nice twists and ideas, including puzzles, adventure-game style inventory, and a lot of cool power-ups and weapons. For sure one of the best games in its genre. The only things missing from the Amiga game are the cool background Copper effects, sadly some of the atmospheric sound effects. The smooth-as-silk scrolling of the Amiga version is also missing, although the scrolling looks okay for PC standards of that time. Given the awful music of most Amiga-to-PC conversions, I was pleasantly surprised that the very cool title music by Nation XII (John Foxx) made it to the PC - a decent FM-sample mix version.

Overall, Gods remains even today one of the best platform games ever made. Bitmap Brothers' magnum opus combines great action, innovative inventory management, many cool weapons and power-ups, devious level design, and even a novel mythological setting, into a game that has the rare, almost mystical ability to immerse the player in its world. If you've never played Gods, don't call yourself an action fan :) 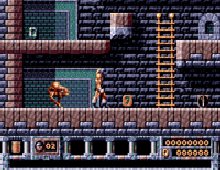 People who downloaded this game have also downloaded:
Xenon 2, Golden Axe, Gods, Prince of Persia 2: The Shadow and the Flame, Magic Pockets