A cute action game starring Skuld, the goddess from hit Japanese anime Ah! Megami-sama! (Ah! My Goddess!) series, Skuld is a fun mini-action game that features great animation, sounds, and addictive (albeit simplistic) gameplay. True to her job in the anime, Skuld's goal in the game is to squash computer "bugs" (literally and figuratively speaking) with a large mallet. Her job, in other words, is to "debug" the Yggdrasil Reality Computer which controlls all realities. Gameplay is similar to whack-a-mole carnival game, although as Skuld you can jump around the screen to avoid the bugs. Squash enough bugs, and you'll come face to face with the "boss" bug at the end of the level. Clearing the level restarts the game with tougher bugs (requiring 3 hits or more to kill) and just more of them. Despite repetitive gameplay and only one background, Skuld is a solid and well-executed anime action game. Part of a larger collection of games that Banpresto released on CD in 1997 in Japan, Skuld has since been released as freeware. Highly recommended! 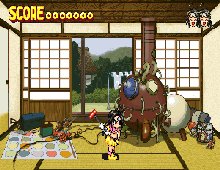 People who downloaded this game have also downloaded:
Star Rangers, Soldat, PANgIC Plus, Frenetic Plus, Silverball Plus 2