Silverball Plus 2 is a pretty good pinball game by Epic Megagames, published by Micro League in 1994. From the information page at MobyGames:

"Silverball is basically a commercially published version of the game Epic Pinball. The game engine is nearly the same, only the tables themselves are different. It comes with four tables: Fantasy, Blood, Snooker Champ, and Odyssey. Some distributions ("Silverball Plus 2") include two extra tables, Warbot and Duel, which are more or less the same as the Excalibur and Magic tables from Epic Pinball with some different art and music. Finally, a seventh table, Nova, may or may not be a part of the game [- the table was included in Silverball Plus 2 but does not show up on the main menu due to missing table intro page, music, and sound files.]"

All in all, Silverball Plus 2 will not dislodge classics like Pinball Fantasies from their lofty status, but it is still a decent, above-average title. With 7 tables and the ability to accommodate 4 players at a time (each taking turn to play), the game offers much more "bang for your buck" than most pinball games. 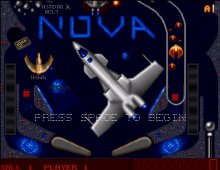