Slam Tilt is an excellent pinball game from 21st Century Entertainment, best known for Pinball Fantasies and Pinball Illusions. Fans of these classics won't be disappointed with Slam Tilt, although this was not developed in-house: the game was designed by Sweden-based "Liquid Dezign," which later changed its name to Unique Development Studios (UDS) and went on to develop more pinball games for 21st Century.

Slam Tilt is not a revolutionary game, but it does what every good pinball game offers: entertain pinball fans with smooth gameplay, interesting themes, and excellent graphics and sounds. As per usual, there are four 2D tables in the game, each centered on a theme. Themes of all four table encompass a good range of subjects: Mean Machines (the weakest table of the bunch) depict Mad Max-style chaos; The Pirates offers mermaids, cannonballs, sharks and swordplay; Ace of Space (second best table in my opinion) is full of alien attacks, light sabers, and space stations; Night of the Demon - in my opinion the best table here - is the only one with two flippers but no less action, as it offers up spirits, vampires, zombies, witchcraft, and more.

Multiball is available on all the tables, multiple flippers on most of them, and there are many ramps to shoot and traps to put the ball in. The game plays very smoothly, and looks great in hi-resolution SVGA mode (which looks even better at 800x600). The top of the screen is filled with the score table which offers neat sub-games and animations along with its usual job of displaying your score. If you enjoy pinball games, Slam Tilt is a worthy addition to your collection. 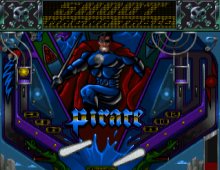