In the crowded field of PC pinball games, there has been a number of "experimental" titles released by daring developers who used unique approaches that defy pinball conventions. Most of these games, such as Starball and Living Ball, suffer from poor playability that overweigh their innovations. Fortunately, Pinball Prelude is not one of them.

At first glance, Pinball Prelude looks like your typical pinball game, offering three color tables each with its own theme. But you only need to spend a few minutes with each table to realize how different they are from standard pinball tables.

The tables are based around the common theme of time/evolution: so we have Past, Present, and Future tables. The most "typical" of these is the 'Present' table, which sports the usual targets and combos, but with many nice details such as a camcorder and a tiny table football. The most unique table is the 'Past' table, which looks like a prehistoric grassland, complete with a couple of dinosaurs, cave area, and a hill. On this table, you can play the unique and strangely appealing "splat-a-rat" sub-game. This table can be "finished," however, meaning it has less replayability than the other two. The five-flippered 'Future' table is the most innovative table in the game. Here, you must power up a 'drone' (a fancy pinball ball) and send it to recharge the city's ventilation system. This drone consistently absorbs pollution, so it becomes heavier and heavier the more you play. Needless to say, this makes the drone very hard to control, until you send it to the 'cleaner' to get rid of pollution.

In contrast to most other "experimental" pinball games, Pinball Prelude is highly playable and quite addictive once you get used to its eccentricities and weird sub-games. Ball physics is reasonably realistic, and multiball modes are a lot of fun. Each of the tables is also much bigger than an average pinball game: it scrolls horizontally as well as vertically. If you are a pinball fan and are looking for something different from the usual fare, Pinball Prelude is a must-play. Highly recommended! 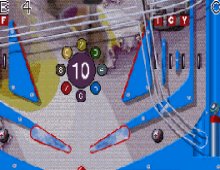