Psycho Pinball is a very good pinball game indeed. Probably the best one i ever played. It features 4 great tables to play on : Psycho, Trick or Treat, Wild West or The Abyss. Each table can be played, but what makes this game special? If you play the Psycho table, which is like a cirkus, you can gain access to the other tables through it, and 'warp' from table to table. There's a whole lot of different things to achieve at each table.

The game has great sound and graphics, and a very configurable system for making it harder or easier in more ways. Normally i'm not into pinball games, but this game got me playing alot anyway. This is really worth a download. Great game!

Psycho Pinball is a vastly underrated pinball game that will please both beginners and experts alike. Developed by Codemasters and published by Phillips Media, the game offers 4 fun tables, good music, and a clear digital voice that guide you to extra points and jackpots.

Similar to most other pinball games, and Extreme Pinball in particular, you play Psycho Pinball from a top-down perspective, seeing half of the table on the screen, which then scrolls up or down to track the ball. The four tables are Psycho, Trick or Treat, The Abyss, and Wild West. In addition to having different settings and goals, they vary in difficulty level. What sets Psycho Pinball apart from other pinbal games is the bonus games you can play if you get the ball in the right hole. These bonus games are played at the bottom of the screen, and give you extra points. The table are "linked" in a sense that you can go to the other tables if you get the ball in the correct spot.

Aside from fun bonus games, Psycho Pinball has all the trappings that will keep pinball fans hooked for a long time. The game features a three ball multiball, a realistic tilt, and progressive game play targets with rewards. Up to four players can play on each table. Also included are twelve different surface types of varying friction like rubber and metal, over 200 sound effects, three difficulty levels with five speed options from Fogey to Psycho, and excellent animations. Good graphics, clearly stated goals, and plenty of on-line help will introduce newbies to the genre, while veterans will have fun with all-around solid gameplay and bonus games. Recommended! 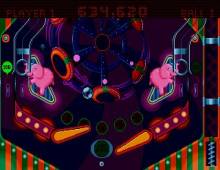