Soldat is a unique side-view multiplayer action game. It takes the best from games like Liero, Worms, Quake and Counter-Strike and gives you fast action gameplay with tons of blood and flesh. Soldiers fight against each other on 2D battle arenas using a deadly military arsenal. This is why multiplayer was invented.

There are tons of different maps to play at and each of them got its own unique safe spots and other places that you can use to surprise potential enemy soldiers. The gameplay is very fast and you can't avoid getting killed simply because you sometimes start between 2 enemy soldiers firing at each other and also because you don't have much health. Of course you can pick up extra health kits but there aren't many of them. You don't' have unlimited ammo either but luckily you can pick that up as well. You also have a jet pack available so you can fly off the ground - just remember to watch the available energy as you will otherwise drop to the ground quite fast.

Soldat is one of the most entertaining and unique multiplayer games but even just playing against other computer players is fun as well and very challenging as well. The graphics are very detailed. You will notice this when killing other soldiers or being killed yourself. The interface is very smooth and it has easy controls as well. Overall a great game which you won't regret downloading.

One of the best multiplayer action games I've come across, Soldat is a great Worms-style game that takes the concept to a whole new level. The official description says it all: "Soldat is a unique side-view multiplayer action game. It takes the best from games like Liero, Worms, Quake and Counter-Strike and gives you fast action gameplay with tons of blood and flesh. Soldiers fight against each other on 2D battle arenas using a deadly military arsenal."

The game is a lot of fun in single-player mode where you basically fight against computer-controlled soldiers, but like all multiplayer shooters, it's the multiplayer modes where the true fun begins. In addition to typical multiplayer modes like Deathmatch, Capture the Flag, and Teammatch, Soldat includes a great new innovation called "Rambomatch." In this mode, everyone competes to be the first one to get John Rambo's bow on the map (sounds like Rambo loses his heavy weapons somewhere along the way...). The player with the bow becomes Rambo, gains superpowers and can regenerate health. The other players then must try to kill Rambo because only he gains points for each kill. Quite innovative, and a lot of fun especially with a lot of players.

Soldat includes a wide range of weapons and power-ups that keep the game interesting and varied. You can fly with jet pack, although you must watch the fuel level. My favorite power-ups are the "Predator," which turns you invisible for 30 seconds, and the "Flame God" which - well, you can guess what it does ;) The game's graphics aren't the brightest spot (it can become difficult to distinguish between different teams in the thick of the battle), but it's more than adequate for this kind of multiplayer mayhem. Overall, if you like Worms or action games in general, Soldat is simply a must-have. The author is actively developing new versions of the game, but I've decided to put the latest version as at July 31, 2002 here because the official site is very slow. Keep your eyes peeled on the site for future updates, including a map editor. Highly recommended! 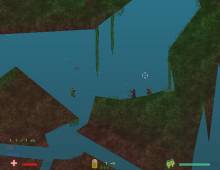