Shakii the Wolf is a fun platformer designed specifically for kids (6 years old and older). The story goes as follows: "Shakii The Wolf once ruled the peaceful Kingdom of Shake until the evil, almost invincible Lion Warrior Midnight Sword appeared, plunging the land of Shake into an abyss of chaos and darkness. Shakii The Wolf must now set out to regain his kingdom."

Naturally, you control Shakii on his dangerous quest. Similar to Disney's The Lion King game, Shakii the Wolf sports vibrant backdrops, creative level designs, and well-animated enemies. Although the game isn't as smooth as Disney's classic, it does make up with more gameplay variety. For instance, you have multiple attack modes at your disposal in addition to basic clawing attacks, including a long-range rolling attack, and special attacks using fire wind. The levels are also nicely varied, including cities, caves, and castles. The game also has over 10 types of power-ups you can collect to make Shakii more powerful.

Although it may seem like a cheap knock-off of Disney's platformers, Shakii the Wolf is in fact one of the few side-scrolling games that were designed specifically for kids. The game is relatively easy, colorful, and populated with attractive cartoon animals. If you have budding action gamers in your house, or if you like platformers but find Disney's games too frustrating, Shakii the Wolf will definitely keep you or your kids entertained for hours on end. Highly recommended for this old game. 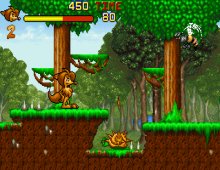