SpiffyPilot is a fun futuristic action game created as a senior project in high school. As the official description puts it, "...you control a ship that can jump, shoot, turn, and accelerate. So far, you can collect PowerUps, shoot bad guys, and stuff like that. It is sort of based on X-Pilot, except that it's for DOS and it is more graphically oriented." While the game is quite a lot of fun on its own, it can be played against other human players over an IPX network. The game is fast, fun, and even lets you design your own levels with the included level editor. What more can you ask for in a coffee break game that's even free to boot? Recommended! 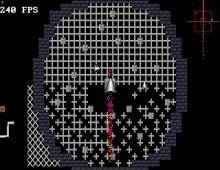