Smoke Attack is another fun freeware game from the Swiss division of Phenomedia, one of the world's best promotional/tie-in game developers (an increasingly popular genre now commonly referred to as "ad-games"). Commissioned by Switzerland's Federal Office of Public Health, Smoke Attack was designed to increase people's awareness on the danger of smoking.

You control "Oxy," a cute wide-eyed hero equipped with an oxygen gun. Your job is to navigate through offices, collect keys to unlock doors, and shoot smoking balls and cigarettes. You can find secret weapons, extra ammos, and other power-up items scattered throughout the level. Your goal is find the exit to the next level, where you'll fight even more enemies.

Anyone who's familiar with Phenomedia's cult classics Moorhuhn Jagd series will find the same graphical excellence in Smoke Attack. The graphics are very crisp and detailed, and all the animations - down to weapon effects - are excellent. Although the gameplay is slightly repetitive, the higher-than-average difficulty level and varied level design should keep you occupied for at least as long as your coffee break lasts. 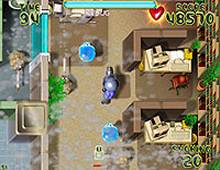