Last Defender is a great horizontal shooter from Miguel "MIG2" Perez, amateur designer who is best known for Lost Valley RPG game. The game features outstanding graphics, addictive and frantic shooting action, and well-designed levels and enemy ships. Although it would already be a great game if the list of features stopped there, but MIG2 went above and beyond most shooters by adding a lot of nice extras. For example, you can 'unlock' certain special options after finishing the game - you will see different options for different difficulty level (there are four in total). One of the coolest features that more shooters should use is the ability to steal weapons from enemy ships to use on your own. In addition to 4 standard weapons, this gives you effectively over 20 weapons to choose from.

Similar to other games from the same author, Last Defender is hard - very hard. But the nice graphics and great parallax scrolling action will keep you glued to the screen regardless of how many times you have to start over. More sound effects would have been nice, as well as more play-testing time (I found a bug or two - sometimes stolen weapons won't work), but as it stands Last Defender is already a fun and very challenging shooter. More than most freeware releases, it truly makes you feel like playing fun 8-bit shooters on the Nintendo system again. Highly recommended! 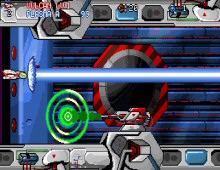