NemesisCrisis: Operation Gallant Thunder is another excellent freeware shooter from Japan. The game is similar to Rebel Assault, except with detailed polygonal 3D instead of photo-realistic digitized graphics. Gameplay is the same as other rail shooters: you view the action from a first-person perspective, and have no control of your ship's movement. Your job is basically to move the crosshairs quicky to the highlighted enemy ships as they come into view, and fire at them as accurately as possible. Your shield level is shown at the bottom of the screen: once your shield is gone, it's game over. The strength of NemesisCrisis lies in excellent ship designs that are reminiscent of Japan's popular Macross anime series. Some of the ships fly by too quickly for you to get a good look at them, but the motherships are very well rendered and appropriately intimidating with their gigantic size. The action is a lot of fun, although it seems more difficult than average - newbies be warned. All in all, an excellent space combat shooter that should please everyone who is a fan of the genre, even if new levels look like the last one. 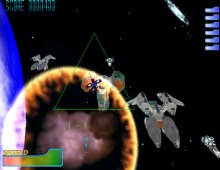 People who downloaded this game have also downloaded:
Marathon 2: Durandal, GunViper, Incoming, House of the Dead 2, The, Outwars