Outwars is a fun, innovative 3D shooter/strategy hybrid from SingleTrac that feels like Looking Glass' Terra Nova: Strike Force Centauri, except with a more stereotypical plot (think Starship Troopers) and "canned" NPCs but adding plenty of fun multiplayer options. You play an elite futuristic Marine protecting the universe from vicious hordes of aliens.

The game has a lot of details and accurate physics that it's better described as a "combat simulation" (like Mechwarrior 2) than a "3D shooter" like Quake. The game is based on missions. To advance, you need to complete each mission in sequence. You start the game by going through a few training missions, with the final session turning into an impromptu encounter. Your suit comes equipped with a standard assault rifle (low power but infinite ammo) and another, more powerful weapon with finite ammo—like a flame-thrower, or a more powerful blaster. Bomb charges are available for destroying larger mission objectives, and grenades and rockets abound for when the little guns won't quite do the trick. A lot of fun in the game involves taking advantage or your jetpack, which allows you to spend a lot of time in the air if used correctly in short bursts. This gives you the ability to maneuver and to cross various different types of terrain easily. Hang time is maximized when you obtain the glider wings.

Controlling your marine is the hardest part in Outwars. It takes a lot of practice to maneuver and use the jetpack effectively, which is crucial in the most difficult missions. The game is much more difficult than your average FPS game, but fortunately you can spend a lot of time practicing during the training missions (and restore them to replay later), and a good variety of missions and addictive gameplay will keep you trying until you "get it right." If you enjoy Terra Nova, you'll most likely enjoy this old game that isn't nearly as good, but comes close to that classic. Highly recommended. 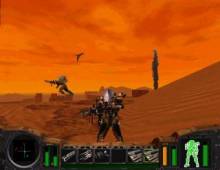