Infestation is a fun and diverse 3D ground combat game that features Transformers-style futuristic vehicle that can be transformed into five different shapes. In a mundane shoot-the-aliens plot, you pilot an experimental vehicle called ACAM, which can turn into aircraft, hovercraft, and other vehicles.

The gameplay is not much more complicated than other 3D action games (Incoming comes to mind), except for a few nice features. Your goal is to blast all the aliens that have invaded and infested 22 planets. Along the way, you can collect valuable resources such as Crystals, Energy Spheres, and even lost scientists. These scientists, once rescued, can research alien technology. Each new piece of alien knowledge or technology 'discovered' either advances the plot, or gives you a cool new weapon/upgrade for your buggy. This is a nice plot device/feature combination that helps enliven gameplay - even when the action gets repetitive (and it will, given mostly-drab terrain and relatively few enemy types), you will be compelled to keep playing just to see what your scientists come up with next.

Although your objectives remain largely the same from mission to mission, there are physical 'puzzles' that make the game more interesting. Most of these simply involve figuring out which vehicle type to use to get from point A to B, but they are still a nice addition. One of the game's best features is the diverse multiplayer modes: you can play four completely different game styles against other human players, including racing, capture the flag, and football. LAN, TCP/IP, and serial connection are all supported.

Infestation is a fun game - it just lacks that elusive quality of addictiveness that characterizes classics like Battlezone. I also prefer Frontier's earlier V2000 (a 'sequel' to Virus), mostly because Infestation is less challenging and populated by less interesting alien enemies. Worth a look, but not a classic by a long shot. 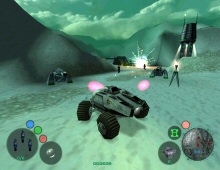 People who downloaded this game have also downloaded:
Freespace 2, House of the Dead 2, The, Incoming, Metal Gear Solid, Kingpin: Life of Crime