One of the most underrated giant robots games ever made, 7th Level's G-Nome is an excellent first-person 'mech game similar to Sierra's Earthsiege series. Ty Brewer encapsulates both the high and low points of the game very eloquently in his review for Games Domain:

"G-Nome represents an effort by 7th Level to reach out to the hard core gamers with exciting action-filled games that appeal to the main stream PC gaming audience. G-Nome is a cross between the deliberate tactics of Mech Warrior 2 and the frantic frenzy of Duke Nukem. So, you've seen first-person shooters before? Not like this. With the proliferation of games in this genre, each new game must have an "angle" to separate itself from the pack. In one of the most interesting spins to hit first-person shooters, G-Nome makes a strong case for an interactive environment that allows the gamer more freedom to choose HOW the game is played.

7th Level accomplishes this feat of interaction by allowing the gamer to choose the robot he occupies. Is your robot missing a leg and almost our of ammunition? That's fine. Just go hijack that nice new one by the motor pool. Oh, don't forget to watch out for other 'bots while you're running across that wasteland. This method extends the life of the player by allowing them to eject from dying vehicles and move on to bigger and better options. The skilled pilot must be able to man a new and possibly unfamiliar 'bot when the pickings are slim. No 'bots nearby? Just go man a guard tower and snipe at other 'bots. While the full scope of this twist cannot be recognized in single-player games, it makes for a treacherous multi-player game. For instance: your 'bot was just destroyed so you hi-jack the very 'bot that kicked yours, and squash the former occupant by his own robot's foot.

The single player game is entirely mission based. You accept the role of a human pilot and attempt to successfully complete more than 20 missions. Each mission increases in complexity and skill demands, and many actually require tactics that are not immediately obvious. The missions are typical of flight simulator games with a little added complexity. Proceed to waypoint 1 and destroy the power generator. Wipe out the bridge at waypoint 2. You will receive instructions when you make it to waypoint 3. The interesting twist here is that while your mech may be destroyed in a nasty battle, you have a fairly good chance of hijacking another mech to continue the mission, although you will be hard pressed to succeed, you still have a chance.

What does this game miss? The game does not allow you to save in the middle of a mission. This may not seem like such a huge flaw, but it is terribly frustrating. Some missions require the completion of 4 or more tasks. The first task may be simple but take 5 minutes to complete; the second phase may take 60 seconds just to get to the waypoint, and another 5 minutes to complete. If you are killed during the second phase, you must start over from scratch. This is definitely not fun. I probably played mission #3 10 times before I was able to figure out the communications with the Darken Convoy. But since that was phase two, and phase one was ridiculously easy, I felt that I wasted a full hour just getting back to the hard part of the mission. At first, it wasn't too bad. You know, it makes you take a holistic point of view to the whole mission. Well, it became bloody annoying after a while, to the point now where I don't look forward to the next mission. This one lacking feature is enough to drive a player insane.

The verdict: yes, this game is worthy of your gaming dollar - if you want to play multi-player. If you don't have access to a multi-player resource (the internet, a LAN), then you will still enjoy the game for many hours if you can just take a Valium before you take on a new mission to help you with the frustration of not being able to save a game in mid-mission! In short, this takes first-person shooters to a new level - the 7th Level."

Overall, G-Nome may not raise the bar for 'mech games, but it does offer a lot of innovations and much more freedom of choice than even the most celebrated 'mech games. At the very least, it?s the only 'mech game in town that lets you steal other people?s vehicles :) Highly recommended. 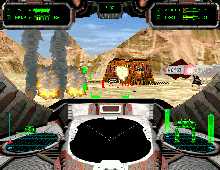